AlarmEye®  VFD system is a unique product used to identify smoke and flame at its source over great distances. The system utilises a bespoke camera that uses an innovative detection method which incorporates UVIR technology to confirm both smoke and flame in the field of view.

The camera can instantly detect and transmit images in real time for instant verification and confirmation of an incident.

The Alarm Eye camera is specifically designed for hazardous environments.  A variety of camera options are available for areas which require intrinsically safe and explosion proof equipment such as; fuel storage and petrochemical production sites and chemical processing plants.

The Alarm Eye® VFD system is completely equipped to operate independently and contains an embedded DSP intelligent algorithm, a RS485 com port camera and output relay connection making it compatible with a conventional fire alarm system.  As well as having the ability to be deployed within a larger network surveillance system.

The Alarm Eye® VFD system also offers a digital video recording server called,” FireDVRTM”,. This system can be incorporated into the system and be configured to record all images from the existing CCTV system. 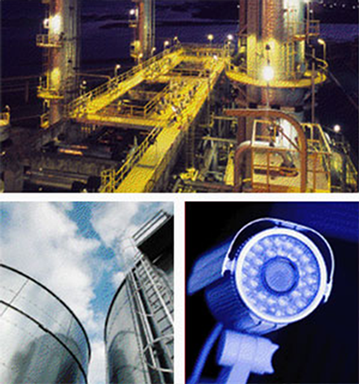 Video Fire Detection Systems biggest advantage is that it detects fire at the source, whatever the camera can see the system can detect.