The GKB - VFD FM approved system can detect smoke and flame fast through a highly sensitive, proprietary image analytics. Relying on visual detection of smoke and flame means the VFD is well suited to detection in large open-space areas and over longer distances, where traditional smoke and fire alarms systems are incapable of detection.

Once fire is detected, the VFD system signals detection via an on-screen display notification, triggers alarms via output relays and has the ability to send a short-message-service (SMS) alert to mobile phones. In order to prevent alarm failures, the VFD system also sends notification if a loss of video signal is detected. In such cases, the notification remains active as long as the problem is

A VFD server can support up to 8 video cameras and is capable of combining further units (up to 16) by utilizing the VFD console server which provides for a fully automated fire detection system of up to 128 video cameras.

Each server display provides up to 8 video feeds from different camera locations providing the operator with important visual verification of incidents and valuable information on the status of the system.

The benefits of a GKB - VFD system is the ease of integration, operation & maintenance. 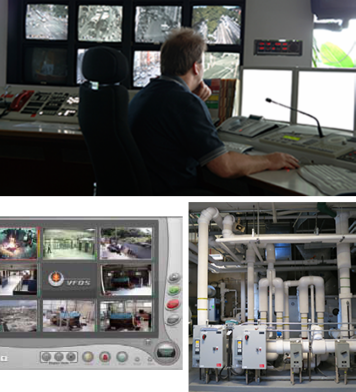 Video Fire Detection systems biggest advantage is that it detects fire at the source, whatever the camera can see the system can detect.